The site is secure.
The https:// ensures that you are connecting to the official website and that any information you provide is encrypted and transmitted securely.

Please be aware that some independent online entities are charging a fee to download and/or print versions of our forms. This website and anrOnline are the only official sources for Act 250 forms. Contact your Act 250 district office if you have questions.
TTY

Contact your local District Coordinator who will help you determine whether you need an Act 250 permit. Look up the district by town here.

The late 1960s brought sudden and dramatic change to Vermont’s quiet countryside. In population and developed areas, the state had hardly grown since the start of the 20th century. Now, almost all at once, new permanent and part-time residents began flooding in.

The opening during the ’60s of the Interstate Highway System in Vermont brought the state at least an hour closer in driving time for residents of the Boston and New York City areas.  At about the same time, IBM began creating a major facility in Essex Junction. Vermont was promoting tourism — and the southern Vermont towns of Wilmington and Dover, among others, had become very popular skiing destinations. Towns were suddenly faced with the prospect of hundreds of new second homes and condominimum, often built on sensitive mountainsides. Gov. Davis, a retired business executive and Vermont native, was deeply concerned — but at that time, there was little he could do. Although Vermont had encouraged local planning during the 60s, it had virtually no environmental regulations or land-use controls. Gov. Davis responded by creating the Governor’s Commission on Environmental Control, chaired by State Representative Arthur Gibb, on May 18, 1969.

After holding well-attended hearings throughout the state, in January 1970 the Gibb Commission recommended a number of environmental laws, chief among them a new state system for reviewing and controlling plans for large-scale and environmentally sensitive development. Gov. Davis insisted that this system not be centered in Montpelier — that the power to review projects and grant permits be vested more locally, in a group of regional commissions.

In spring 1970, the Vermont Legislature passed the Land Use and Development Law, since known simply as Act 250. It created nine District Environmental Commissions, whose members were (and still are) laypersons, not government officials. Their decision-making process, supported by a modest staff, would center on 10 criteria for reviewing development and subdivision plans that would involve significant environmental, aesthetic, and/or community impacts. This review of development by local Vermont citizens has, with the 10 criteria, been the center of the Act 250 process ever since.

In 1995 Art Gibb, Jim Jeffords, and Al Moulton discuss their roles in the passage of Act 250, 25 years earlier.

Act 250 also established the Vermont Environmental Board to review appeals of District Commission rulings. Its original members included a natural-science professor, an architect, a realtor, a community leader and homemaker, a county extension agent, a ski area operator, an engineer,a businessman, and a county sheriff. This lay board heard District Commission appeals for 35 years, until the general appeal function was transferred to the Environmental Court in February 2005. 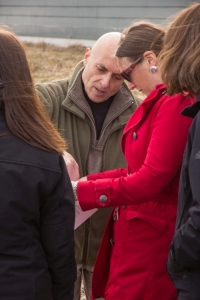 The 10 criteria of Act 250 have changed little since the passage of the law, however several criteria have been modified in recent years. In 2006 Criterion 9(B) was modified to incorporate a process for mitigation of impacts to primary agricultural soils. In 2014 Criterion 5 was amended to include a requirement for transportation impact fees and Criterion 9(L) was amended to address strip develelopment. With each of these changes the updated criteria incorporated incentives to guide new development into Vermont's downtowns, villages, and other "designated centers."

The organizational structure has also  been modified over time. In 2004 the Environmental Board and Water Resources Board were combined into a single entity, the Natural Resources Board. As part of the 2004 amendments, all appeals of District Commission decisions, as well as permit decisions of the Agency of Natural Resources, are now heard by the Superior Court, Environmental Division.

Because of the Act 250 process, the quality of development in Vermont is generally higher than in states without comprehensive land use laws. Act 250 was designed to achieve a balance between economic development and the legitimate interests of citizens, municipalities, and state agencies in protecting the environment. Innovative and bold at its inception, Act 250 is now part of the fabric of Vermont.